The following guest blog post is from Dr Clarissa Chase , an ST5 trainee in paediatrics, at Southampton General Hospital.  Clarissa conceived a positive reporting system called “FERF”. The story of FERF is below: 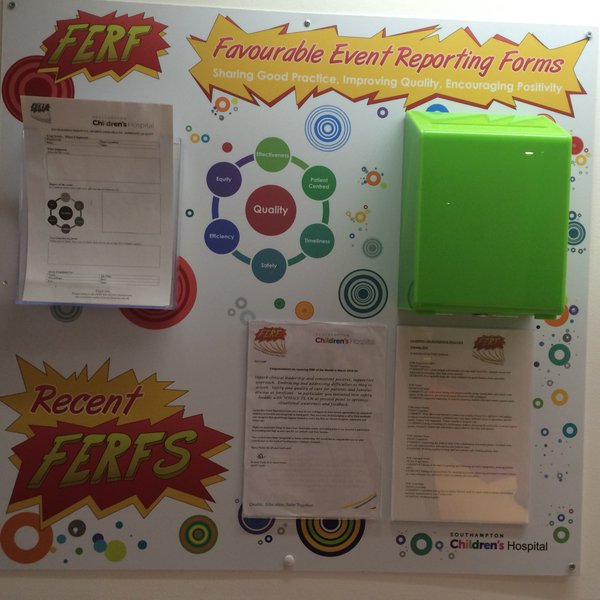 It seems almost every day that a negative healthcare story makes its way into the headlines; missed diagnoses; missed opportunities; repeated failings that suggest a lack of learning from previous serious incidents.

While the issues raised by these stories may be significant, the articles rarely present a balanced account. The distorted information is presented for maximum impact and consequently effects public perception of us all.

As healthcare professionals, we have no right to reply or publicly defend these cases. As we are in the business of preventing harm and striving for clinical excellence it is difficult to know how to manage such misrepresentation. Not least because the barrage of negative press stories and distorted perceptions of NHS care must be having a negative effect on the morale of our workforce.

I don’t think anyone would deny that learning from mistakes is essential.

Reviewing failings, whether in the form of a formal inquiry or simply personal reflection, is necessary to identify hazards or risks and target improvements to address these and prevent any recurrence. Patient safety is paramount and we have a myriad processes to direct our focus at this; adverse incident reporting forms; patient complaint processes; the National Reporting and Learning System to name but a few. All these processes have been designed around identifying adverse events. Perhaps we are guilty ourselves of propagating this endless focus on the negatives, thus further perpetuating dwindling morale.

A 2007 survey for Hospital Doctor suggested 69% of doctors in the UK reported falling morale. The reasons for this are likely to be complex and varied, but might at least in part be a result of a relentless attention on adversity, both within the NHS and in the wider public forum.

So what if we turned that on its head? Redress the balance and recognise that it is as important to learn from the things that go well; the good things we all do every day that get little or no recognition: instead of learning from an example of incorrect care of a post-operative patient resulting from poor handover of information on arrival to the ward, identify the cases where the handover is exemplary and evaluate what makes it so, in order to encourage the process to happen in this way each time. Identify the details of specific positive examples, use them to educate and we will all learn from good practice.

Positive reinforcement is a well-recognised concept first described by psychologist BF Skinner that describes the reinforcement of a specific desired behaviour using a reward; a positive event that follows a particular action will reinforce it and make it more likely to happen again.

Putting this into context within the NHS would seem simple: if the reinforcement takes the form of specific positive feedback, for example: ‘I think you managed that consultation well – you involved the patient in the decision making and summarised all the information clearly’ then we will start to recognise all the things that we all do well every day, while we emphasise what works well and, in so doing, ensure continued good practice. The side effect of this process might be to increase morale and confidence. It will change the way people think about one another and build a stronger team.

I remember an incident as a junior registrar in 2012 when one of my consultants was admitting someone unexpectedly to the ward after clinic. As I was the registrar covering the evening shift she came and found me and took me to the clinic room to meet the parents and their baby. While we were in the clinic room she explained the reason for admission to me, in front of the parents and explained her proposed plan for overnight. I was then able to accompany the parents to the ward and introduce them to the ward staff. It struck me that her actions had a big impact on the very anxious parents. They clearly felt reassured that the discussions had both happened in their presence, and involving them.

Two other things struck me that day: 1) did my consultant realise the positive impact of her actions and 2) what a shame that I was the only person around to learn from her brilliant practice. I wanted to find a way to recognise, emphasise and learn from positive events.

And so the idea of Favourable Event Reporting Forms (FERF) was born. The concept was simple: a paper reporting form to identify positive practice and the individuals involved that could be filled in by any member of the team. A multidisciplinary team would then review the forms monthly and the learning points for each of the events drawn out. These learning points would then provide feedback both to the individuals involved, and to the rest of the team. The individual would receive a letter from the clinical leads of the team. The event and learning point would also be summarised and displayed on a noticeboard for staff, patients and visitors to see, as well as being discussed in Mortality and Morbidity meetings and education sessions.

While striving for clinical excellence we should recognise and celebrate our successes, learn from one other and from the hundreds of brilliant things we all do every day. If we change the way we value each other perhaps we will change the way others view us too.

One thought on “FERF UP YOUR LIFE!”